A banner is a generic term I’m going to use to refer to an internet advertisement. It can be an image, a video, some text, or really anything that could be referred to as an ad.

Each banner type, just like a zone type, has its own strengths and weaknesses. In this video I’m going to go over each banner type and a few examples. We also have a new ad format page over at blog.adbutler.com that contains a frequently updated set of banner templates. If you’re looking for a particular banner style, whether it’s an expandable or slideshow or what have you, feel free to head over there and glance at what we have available.

Consider this video your primer for the world of ad ops. When I first started here at AdButler, I found myself with a lot of questions and not many sources for answers. Although you can pick up the knowledge eventually, it’s always nice to have someone spell things out for you. If you’re wondering what to do with the creative an advertiser sent you, or how exactly to get your banner working properly with AdButler, that’s what this video is for. Let’s start with Image banners.

Image banners comprise the majority of internet advertising out there, and they have three key characteristics: They’re static, they’re lightweight, and they’re compatible with basically everything. Now, just because an image banner is static doesn’t mean it can’t be animated. You can always deliver an animated gif as an image banner, for example. Static more means the banner doesn’t change. It doesn’t become bigger or smaller, it doesn’t change when the mouse hovers over it, and it won’t chase the cursor all over the page.

Generally, you’ll be using Image banners as your go-to format. They’re cheap and easy to make, and everyone understands them.

Flash is the exact opposite to image banners. Where I would say ‘go ahead, go crazy with image banners, they’re great,’ Flash is more like ‘please don’t do anything with Flash if you can avoid it’. Flash is a plugin created by Adobe that basically runs little applications in your browser. Usually it’s used for animated advertisements or little interactive ones. Some companies out there do still work in Flash, and Flash does have great compatibility with older computers, but that’s where the good begins and ends. Flash has major security flaws, does not work on mobile, and will soon disappear completely from the modern internet. If you have to use Flash, do so, I won’t hold it against you, and AdButler does fully support it. but there is an alternative, and that is HTML5 Rich Media Banners.

As I said, all HTML5 Rich Media Banners are served inside iframes (which means they can’t be responsive), and they must be uploaded as a zipped archive. That archive needs to contain any resources you need access to, although you can externally link to some resources if they’re larger such as videos, as well as contain our click tracking macro. Regardless, HTML5 Rich Media Banners are great and powerful. If you want to make something interactive, use Rich Media Banners. There’s also lots of free software out there if you aren’t the coding type, like Google Web Designer, that will help you create the banner.

If the banner you’re working with is delivered to you as an archive, that’s a .zip, chances are it’s a HTML5 Rich Media banner

Custom HTML banners come in a whole bunch of different variations, but usually you can tell because it looks like HTML. For instance, a zone tag, such as this AdButler one or one from another ad server, would be a Custom HTML banner.

VAST is a whole big deal. VAST banners are video banners that play around other content, and are usually referred to as pre-roll or post-roll ads. They’re what show up on Youtube or on a news website before you see the video you clicked play on. Currently, AdButler supports VAST 2.0, and we offer a whole slew of features to get you going. I’m not going to spend too much time on VAST banners because they’re quite a bit different from the other ones I’ve covered today. However, I will go over one thing. I get asked all the time, by people new and old to the business, how to create video banners, and whether to use VAST or HTML5? The answer is, if you want your banner to play around another video, either before or after or during it, use VAST. If you just have a video banner you want to play, that’s a HTML5 Rich Media Banner or Custom HTML banner. You’ll need to throw a video player into the banner, although you can use the basic HTML5 one, and then either host your video externally or inside the archive.

And those are the basic banner types in online advertising. Now, as I said at the beginning of the video, I could go over hundreds of different spins on these types, like expandable or interstitials or anything like that. However, if you take a step back, you’ll see that all those banners fit into one of these types, either Image, Flash, HTML5, Custom HTML, or VAST. 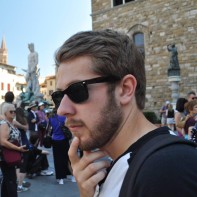